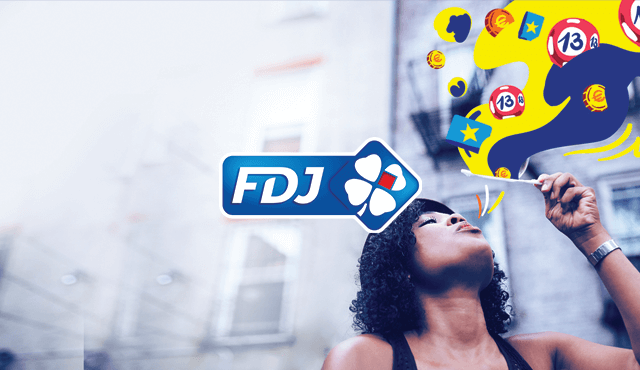 The strategic project FDJ 2020 is already producing good results. Sales reached €15.1 billion in 2017, compared with €14.3 billion in 2016, representing growth of 5.7% (+€800 million). Growth last year was 4.6%. Driven by future investments of almost €300 million over a three year period, the digital transformation of both the bricks-and-mortar and online networks is accelerating; digital sales have nearly doubled to almost €1.7 billion and now represent over 10% of all sales. Customer numbers remain high with 26.1 million players. These customers won a combined total of €10 billion (66.8% of stakes, plus 6%), and almost 200 millionaires were created. These strong results have secured FDJ's position as the second largest lottery in Europe.

For the past three years, the FDJ Group, led by Stéphane Pallez, President and CEO, has been engaged in its growth and transformation project entitled "FDJ 2020, an enhanced vision". €500 million of investments are planned over a five year period, including €250 million in IT and €180 million for the retail network, notably to develop digital sales, modernise the bricks-and-mortar network, launch new and innovative games and services, and expand internationally. In addition to this sum, €25 million has been earmarked for innovation funds. More than half of these investments have been made over the past three years, while sales are up 17% and digital sales have multiplied by 3.5 (in line with the 20% target by 2020). The downward trend in customer numbers reported at the launch of the FDJ 2020 plan has been stemmed.

Stéphane Pallez explains: "FDJ, the world's fourthlargest lottery, is a growing company positioned in a market with great potential both in France and abroad, and is midway through an important transformation which will enable it to continuously adapt to suit its customers' changing habits. We are determined to maintain the dynamism of our value-creating FDJ 2020 project. In 2018, FDJ will focus on developing its sports betting and digital services, improving customer knowledge and helping to restore endangered French heritage with the launch of a dedicated 'Super Loto' and scratch card game. 2018 will also see a new incarnation of the FDJ Group when it moves to its new headquarters".

Growth of sales and digital sales

Sales of online lottery games reached €515 million, an increase of 24% on 2016 (+€100 million). Customer numbers rose by 27% to 1.6 million players (+345 K), predominantly recruited through online draw-based games. These grew by 19%, at a much faster rate than in the retail network. Online Illiko games experienced a significant growth of 36%.

36% of sales on FDJ.fr were made via mobile phones (+10%).Mobile-related services have evolved and now include digital playslips (which generated 50% for 'ParionsSport' stakes at end-2017), a new FDJ app which houses all games, and the new listing of FDJ apps in the Google Play Store.

The return of popular 'Loto' and 'EuroMillions' draw-based games

Loto sales exceeded €1.6 billion in 2017, an increase of 6.2% since 2016. The relaunch of Loto in March, which includes the introduction of a raffle for each draw, has proven successful, generating an additional 1,400 prize winners each collecting €20,000. Growth was also driven by a number of special events including the Super LOTO on Friday 13 October and the "Grand Loto de Noël" (Big Christmas Lotto), inspired by the Spanish lottery, which offered a jackpot of €20 million. Loto is the game that attracts the highest number of players with 17.3 million people buying tickets last year.

Sales of the new EuroMillions launched at the end of 2016 grew 8.6% to €1.5 billion, mainly thanks to its higher jackpots (three long cycles with jackpots over €100 million, compared to two in 2016; average jackpot won of €59 million, versus €43 million in 2016). This change increased the game's customer base to 15.7 million (14.7 million in 2016). EuroMillions created an additional 121 millionaires in 2017. FDJ has a 21% market share in Europe and has regained its position as the continent's second largest EuroMillions lottery, close behind the United Kingdom (23%). It is also in 2nd position in terms of growth, behind Ireland (+16%).

The Illiko range of games generated sales of €7.4 billion in 2017, an increase of 8% from 2016. Its customer base grew to 18.9 million (18.7 million in 2016). FDJ has sought to address the diverse expectations of the French population with a policy of key game launches, which notably include short term games (Paris 2024, "10 ans gagnant à vie", X10 and X20) and some well-established games (Jackpot, Mega Mots croisés and Astro).

Faced with strong competition from online sports betting sites, FDJ has enhanced the digital technology at points of sale and improved the customer experience, notably through the use of digital playslips. It has also improved its online and point of sale range with new betting formulas (combined live bets and boosted combined bets online at ParionsSport).

Although sales did fall by 10% during the first half of 2017, the efforts made by FDJ resulted in growth of 13% during the second semester. Lastly, in 2017, sports betting remained stable with sales of €2.5 billion (+0.3%), thanks to 3 million punters. Activity remains high with growth of 8.9%, excluding exceptional events such as UEFA Euro 2016 and the Olympic Games.

Development of the bricks-and-mortar network

FDJ continued its work to consolidate and modernise its retail network: close to €90 million have been invested since 2015, out of the €180 million total investment planned by 2020 (new terminals, 6,000 new displays in 2017, etc.).

There were 30,800 points of sale in 2017, compared with 31,150 in 2016. FDJ recorded extraordinary performance by opening 1,030 new stands in the Bars, Tobacconists and Newsagents network compared with 730 in 2016, largely due to a proactive policy implemented with the support of professional bodies. There was therefore a net decrease of only 350 points of sale in 2017. The number of points of sale outside bars, tobacconists and newsagents, primarily in border areas, city centres and certain rural areas, remained stable, at approximately 1,500. The FDJ network has established itself as the leading French local distribution network used by 65% of the adult population, of which 25.3 million FDJ customers.

FDJ has sealed new partnerships to facilitate the creation of new services and contribute to the development of the network, including, for instance, with Western Union which will offer its services to FDJ retailers in 2018.

Retailer revenue linked to FDJ activity rose 5.2% to €755 million (approx. +€40 million), representing an average income from FDJ of almost €25,000 per point of sale (an average increase of +6% per POS). This figure has doubled over the past ten years.

The business is committed to Open Innovation and supports numerous start-ups as well as 'Partech', 'Raise' and 'France Digitale'. The Group also became a partner of start-up accelerator Techstar in 2017 and was awarded the French Tech prize for the Major Group/Start-up Collaboration category.

The range of online Illiko games consists of around fifty games, including nineteen introduced in 2017. Innovative concepts such as Super Jackpot (a progressive multi-game jackpot), Next Level (stop or continue format), Justice League (in partnership with Warner) and 'Les clefs du trésor' (with a gamification component), have enabled it to reach new audiences.

In 2017, FDJ tested new physical and digital scratch card games on its network in Northern France. These games offer a scratch card experience in digital format. Another trial of new gaming formats will take place in 2018.

In 2017, FDJ became the first gaming operator in France to launch a chatbot on sports betting, in conjunction with the start-up Botfuel. The chatbot allows users to make simple bets via Facebook Messenger.

FDJ opens up to entertainment games

The company has expanded into the organisation of video game competitions, under the brand FDJ eSport. The two seasons of FDJ Masters League, a professional competition, have generated 7 million live and on-demand views. The one hundred or so FDJ Open Series competitions, available free online and tailored for amateur players, have attracted over 20,000 subscribers and 4 million live and on-demand views. The FDJ Gaming Tour has introduced eSport to 5,000 holidaymakers. FDJ eSport won the 2017 Grand Prix 'Stratégies du Sport' in the eSport category.

In 2017, FDJ also became the first operator to launch a free sports betting website for around sixty major international eSport competitions, both pre-match and live.

The Group's digital transformation, driven by almost €100 million in investments for the future in 2017, has continued to progress. A new organisational structure places customer, both as we know them today, and our customers of tomorrow, at the heart of the Group's plans for new physical and digital experiences.

FDJ has completed the first step in the transformation of its sales network, with the takeover of regional sales areas (55 areas, of which 51 in mainland France). Two thirds of its sales are now managed by 'FDJ Réseau', its sales subsidiary, and one third by sales development companies operated by former broker-agents. In 2017, the company launched the second stage of its commercial transformation, which consists of streamlining and outsourcing logistics (direct distribution), enabling its sales force to focus on commercial development. Twenty one of the fifty-five sales areas taken over have already transitioned to this new system, which represents over 40% of all stakes on the FDJ network.

FDJ continues to expand internationally. It has launched FDJ Gaming Solutions, a commercial brand selling technologies, new generation games and services for the lottery industry. In 2017, it launched a platform to make its innovative games available to other lottery operators. FDJ has also signed new contracts for sports betting with the lottery of Swiss Romandy and the Mexican operator Logrand. BZP, a joint venture of the FDJ Group and the China Welfare Lottery, won a call for tenders to manage scratch cards in the Chinese province of Jilin.

La Française des Jeux (FDJ) is the world's fourthlargest lottery with sales of €15.1 billion in 2017. It offers its 26.1 million customers and the general public a fun, responsible and secure range of lottery games and sports betting. The Group, together with its subsidiaries (FDJ Réseau, LVS, etc.) has over 2,180 employees, a network of 30,800 local points of sale and a multimedia channel that attracts 1.8 million customers. In 2017, FDJ redistributed 95% of its player stakes; €10 billion paid to its customers, €3.3 billion to the community (including €230 million to 'sport for all'), and €755 million to retailers.